Senator Elizabeth Warren has a lot of plans. You can read several dozen of them on her campaign website. Though they cover a broad range of topics, they all come down to one thing in particular: repairing and replacing unfair systems. A staunch progressive, Warren has built a reputation as an opponent of corruption and greed at every level of society.

Like her more conservative opponent Joe Biden, Senator Warren has underlined her personal history with the nation’s often pitiless healthcare industry. The healthcare proposal on her campaign website begins with an episode from her childhood in Oklahoma. “My daddy’s heart attack,” the Senator writes, “nearly sent our family skidding over a financial cliff.” She focuses her plan on the average American family, remarking that they’re often “crushed by health costs.”

Warren has joined fellow New England Senator Bernie Sanders in calling for a complete overhaul of the American healthcare and health insurance system. “Healthcare is a human right,” she argues, “and we need a system that reflects our values. That system is Medicare for All.” Warren’s proposal would effectively replace private insurance and our current government-run systems with an entirely new, more comprehensive, single-payer plan.

Broadly speaking, Sanders and Warren are on the same page when it comes to healthcare. Both have rejected the idea that the private insurance industry should exist side-by-side with a government-run program in the long-term. Warren, in particular, has emphasized how detailed her proposal is in comparison to her opponents’. On the debate stage, she recently characterized healthcare proposals from Amy Klobuchar and Pete Buttigieg (who have since dropped out) as “a Post-It note” and “a Powerpoint” respectively. Both Senators Warren and Sanders have called to eliminate premiums, deductibles, and co-pays and both would place the onus of payment on corporations and the wealthiest Americans.

Warren acknowledges that implementing Medicare for All is neither a Day 1 nor Year 1 initiative. Per her transition plan, Warren would not move to eliminate private insurance until her third year in office. Vox’s Dylan Scott suggests the plan is “a bit of triangulation” on the Senator’s part. It’s a plan that combines progressivism with moderation and, Warren hopes, could provide time to win over moderates in Congress as well as voters who are unsure about rebuilding healthcare from scratch. 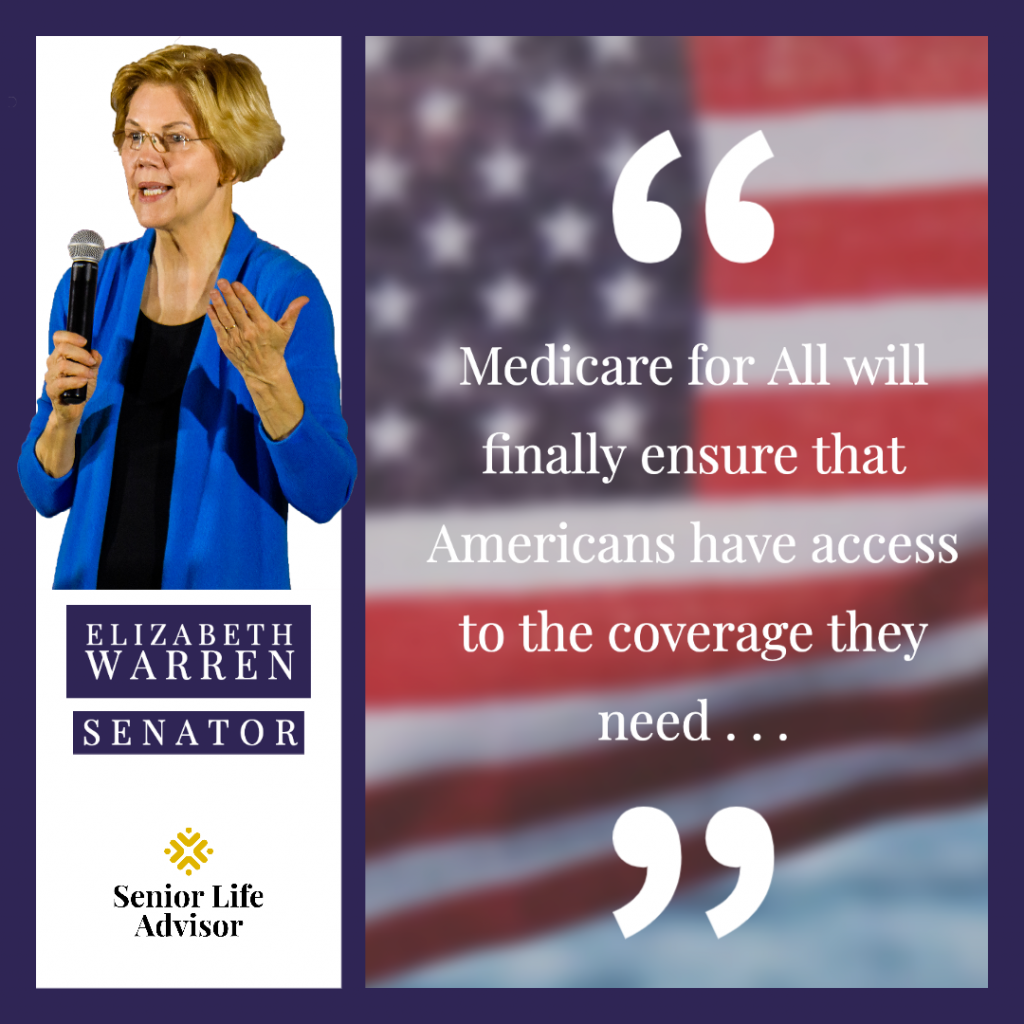 During her first 100 days, Warren intends to pass a bill that would create a new government-run plan for children and low-income Americans. The plan would remain open to anyone — even those with employer-provided health insurance — who wants to enroll. Though the government plan would eliminate 90% of expenses, people with income levels at or above 200% of the poverty level ($25,000 for an individual, $51,500 for a family of four) would pay a small premium and incur some out-of-pocket expenses. Medicare beneficiaries would keep their coverage with new limits on their own cost-sharing.

In the short term, Warren’s healthcare plan looks a lot like the public options proposed by opponents to her right. Voters will need to wait until at least 2023 to see the Warren administration argue for a single-payer system alone.

Medicare for All — paying for it, passing it, etc. — has gotten most of the attention, but it’s just one of Warren’s plans for expanding social programs. “We need to get our priorities straight,” she says, and this means looking out for seniors and disabled Americans receiving Social Security.

Warren points out that retirement is challenging for many seniors and predicts that future generations could have it even tougher. Already, 20% of seniors stay in the workforce into their retirement years and more than 7 million live in poverty. Warren would address this by immediately increasing Social Security and Social Security Disability Insurance by $200 a month.

Warren’s campaign website even offers Medicare for All and Social Security calculators to help voters learn what changes to the program could mean for them. Try it out for yourself to get a sense of what your benefits might look like during a Warren presidency.

After COVID-19: What to Expect from Post-Pandemic Life

Your Guide to the Medicare Advantage Open Enrollment Period