The ongoing spread of a novel coronavirus (COVID-19) has inspired an inconsistent response from the U.S. government, to say the least.

While President Trump initially dismissed concerns around COVID-19, he changed his tune a few weeks ago when the World Health Organization (WHO) declared pandemic status. On March 11th, shortly after WHO’s declaration, the president made several of his own.

In a rare primetime address, Trump announced a new ban on travel to and from Europe and acknowledged the need for emergency funds. This speech did little to alleviate concerns. The next morning, the Dow Jones Industrial Average sunk more than 1,000 points into a bear market.

Even conservative outlets have criticized the administration’s slow and inconsistent response. The National Review’s editorial board charges Trump with a number of offenses including, “offering up unsubstantiated claims and figures from cable television,” “[speaking] about the virus in crude political and personal terms,” and “[standing] in the way of public understanding of the plausible course of the epidemic.”

The President looked eager to address such concerns on March 16th when he encouraged Americans to limit social gatherings to 10 people. This was, notably, a more strict guideline than the one provided by WHO (50 people).

More recently, however, the President has moved away from encouraging extreme caution. This week, Trump repeatedly expressed his belief that American businesses should reopen by Easter Sunday. The suggestion flies in the face of recommendations from public health officials and was generally met with scorn.

Despite widespread criticism, Trump’s approval rating reached 49% on March 24th. This is tied for the highest approval rating of his presidency, equaling the peak it reached in late January.

Following an impressive Super Tuesday, former Vice President Joe Biden rose to become the clear frontrunner for the Democratic nomination. COVID-19 dominated the conversation during his first debate as the contest’s leader. In addition to calling for a “major, major bailout package,” the former Vice President criticized his opponent for focusing on “Medicare for All.” “That does not solve the problem at all,” he argued.

Biden has outlined a two-pronged COVID-19 response encompassing both a “decisive public health response” and a “decisive economic response.” He unveiled the plan in a March 12th speech that drew stark contrasts between himself and President Trump. “We’ll lead with science,” he said, “We’ll listen to the experts. We’ll heed their advice.”

Among Biden’s top priorities is “establish[ing] and manag[ing] a permanent, professional, sufficiently resourced public health and first responder system that protects the American people.” He would do this by reintroducing the White House National Security Council Directorate for Global Health Security and Biodefense. He has also called for free and widely-available testing.

Perhaps most notably, Biden calls on America to serve as a world leader throughout the COVID-19 outbreak and similar future events. His plan is aimed, ultimately, at “Rallying the world to confront this crisis while laying the foundation for the future.” He makes it clear that doing so would first mean, “restoring trust, credibility, and common purpose.”

Whereas Sanders has remained front and center while falling behind in the delegate count, Biden has made relatively few appearances since taking a commanding lead. The New York Times reports that Biden’s low profile has become the subject of suspicion and taunts on social media. Unperturbed, Biden has promised to broadcast regular updates from his home in Delaware. 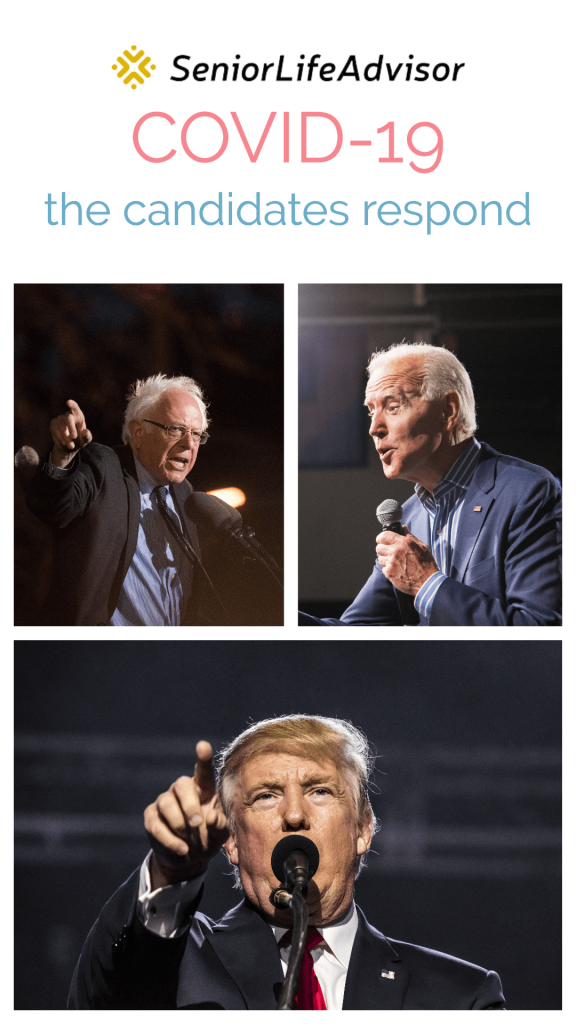 Despite falling well behind Biden over the last month, Senator Bernie Sanders has confirmed he will participate in April’s debate. It remains to be seen whether that debate — which has no official date or location — will occur. Biden, for his part, has hinted that he would not participate. Nevertheless, Sanders has had ample time to address the COVID-19 outbreak both on and off the debate stage. In addition to March 15th’s debate, the Senator has used a number of livestreams on social media to address questions from voters and communicate the need for sweeping reforms and decisive action.

Over the last several weeks, Sanders has leveraged his record-breaking fundraising capabilities to support a number of charities and nonprofits in fighting the virus and offering relief to affected Americans. The campaign has raised more than $2 million for organizations including Meals on Wheels and the National Domestic Workers Alliance.

Sanders has addressed his signature platform issues with even more urgency than usual since the COVID-19 outbreak reached pandemic status. While his poll numbers have dropped, support for Sanders’ Medicare for All proposal has remained steady. If anything, the movement for a single-payer healthcare system has gained momentum as more and more Americans have fallen ill or entered self-isolation. A recent survey from the Be a Hero PAC found that Democratic and Independent voters, in particular, are united in supporting Medicare for All.

As a Senator, Sanders has played a major role in drawing up legislation related to COVID-19. Though he initially proposed monthly payments of $2000, he voted ‘Yes’ on the stimulus bill that will provide most Americans with a one-time payment of $1200. He took his Republican colleagues to task before casting that vote and excoriated an amendment proposed by Nebraska’s Ben Sasse. Sasse’s amendment would have eliminated portions of the stimulus package that expand on unemployment benefits. In a fiery speech, Sanders said, “Some of my Republican friends have still not given up on the need to punish the poor and working people.” The bill passed in the Senate — without Sasse’s amendment — by a unanimous vote.

It is all but impossible for Sanders to capture a majority of Democratic delegates and highly unlikely that he will keep Biden from doing so. For now, it doesn’t look like that will stop him from staying in the race and pushing the conversation on healthcare leftward.

COVID-19 remains a developing news story. Seniors should expect several new updates every day for the foreseeable future. In addition to identifying credible news sources, seniors are encouraged to practice safe social distancing and comply with state and local policies.

After COVID-19: What to Expect from Post-Pandemic Life

Your Guide to the Medicare Advantage Open Enrollment Period